The American Association of Retired Persons (AARP, Inc.) “is a United States-based interest group with a membership founded in 1958 by Ethel Percy Andrus, Ph.D., a retired educator from California, and Leonard Davis, later the founder of the Colonial Penn Group of insurance companies.

AARP is a 501c4 non-profit organization with a mission to enhance the quality of life for all as they age. The association advocates for positive social change and delivers value to members through information, advocacy and service. With nearly 38 million members, AARP is one of the most powerful lobbying groups in the United States.”1

1From Wikipedia, the free encyclopedia 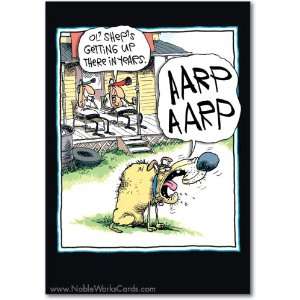 Even Fido is Concerned

AARP in recent years has come under much criticism due to its treatment of various issues considered by much of its membership to not be in their best interest. I received the below letter via email stating one person’s frustration.

A SHRINKING AARP IS LOSING PLENTY OF SENIORS. THE LADY WHO WROTE THE LETTER BELOW NOT ONLY HAS A GRASP OF THE SITUATION, BUT AN INCREDIBLE COMMAND OF THE ENGLISH LANGUAGE!

Her letter was sent to Mr. Rand who is the Executive Director of AARP. It only takes a few days on the Internet and this will have reached 75% of the public in the U.S.A.

Recently, you sent us a letter encouraging us to renew our lapsed membership in AARP by the requested date. This isn’t what you were looking for, but it is the most honest response I can give you. Our coverage gap is a microscopic symptom of the real problem, a deepening lack of faith. While we have proudly maintained our membership for years and long admired the AARP goals and principles, regrettably, we can no longer endorse its abdication of our values. Your letter stated that we can count on AARP to speak up for our rights, yet the voice we hear is not ours.

Your offer of being kept up to date on important issues through DIVIDED WE FAIL presents neither an impartial view nor the one we have come to embrace. We do believe that when two parties agree all the time on everything presented to them, one is probably not necessary. But, when the opinions and long term goals are diametrically opposed, the divorce is imminent. This is the philosophy which spawned our 200 years of government.

Once upon a time, we looked forward to being part of the senior demographic. We also looked to AARP to provide certain benefits and give our voice a power we could not possibly hope to achieve on our own. AARP once gave us a sense of belonging which we no longer enjoy. The Socialist politics practiced by the Obama Regime and empowered by AARP serves only to raise the blood pressure my medical insurance strives to contain. Clearly a conflict of interest there! We do not understand the AARP posture, feel greatly betrayed by the guiding forces that we expected to map out our senior years and leave your ranks with a great sense of regret. We mitigate that disappointment with the relief of knowing that we are not contributing to the problem anymore by renewing our membership. There are numerous other organizations which offer discounts without threatening our way of life or offending our sensibilities and values.

This Obama Regime, which Hi(liar)y also espouses, scares the living daylights out of us. Not just for ourselves, but for our proud and bloodstained heritage. But even more importantly for our children and grandchildren. Washington has rendered Soylent Green a prophetic cautionary tale rather than a nonfiction scare tactic. I have never endorsed any militant or radical groups, yet now I find myself listening to them. I don’t have to agree with them to appreciate the fear which birthed their existence. Their borderline insanity presents little more than a balance to the voice of the Socialist Mindset in power.

Perhaps I became American by a great stroke of luck in some cosmic uterine lottery, but in my adulthood I CHOOSE to embrace it and nurture the freedoms it represents as well as the responsibilities.

Your web site generously offers us the opportunity to receive all communication in Spanish. ARE YOU KIDDING??? The illegal perpetrators have broken into our ‘house’, invaded our home without invitation or consent. The President insists we keep these illegal perpetrators in comfort and learn the perpetrator’s language so we can communicate our reluctant welcome to them. I DON’T choose to welcome them, to support them, to educate them, to medicate them, or to pay for their food or clothing. American home invaders get arrested. Please explain to me why foreign lawbreakers can enjoy privileges on American soil that Americans do not get? Why do some immigrants have to play the game to be welcomed and others only have to break and enter to be welcomed?

We travel for a living. Walt hauls horses all over this great country, averaging over 10,000 miles a month when he is out there. He meets more people than a politician on caffeine overdose. Of all the many good folks he enjoyed on this last 10,000 miles, this trip yielded only ONE supporter of the current Regime. One of us is out of touch with mainstream America. Since our poll is conducted without funding, I have more faith in it than ones that are driven by a need to yield AMNESTY (aka- make voters out of the foreign lawbreakers so they can vote to continue the governments free handouts). This addition of 10 to 20 million voters who then will vote to continue Socialism will OVERWHELM our votes to control the government’s free handouts. It is a “slippery slope” we must not embark on!

As Margaret Thatcher (former Prime Minister of Great Britain) once said, “Socialism is GREAT – UNTIL you run out of other people’s money”.

We have decided to forward this to everyone on our mailing list, and will encourage them to do the same. With several hundred in my address book, I have every faith that the eventual exponential factor will make a credible statement to you. I am disappointed as all get out! I am more scared than I have ever been in my entire life! I am ANGRY! I am MAD as heck, and I’m NOT going to take it anymore!

Furthermore, if you do a little checking on AARP’s website, you will find their anti – Second Amendment position to disarm us. When the government takes the Senior Citizens’ guns away, we will be at the short end of the stick when the time comes for us to defend ourselves from the drug addicts and other bottom-feeders who know us to be soft targets.

.. In internet lingo: If enough people pass this on, it will go viral.

“If you do not take an interest in the affairs of your government, then you are doomed to live under the rule of fools.” – Plato

Life is a gift, Freedom is a responsibility. – unknown

Tolerance is the virtue of a man without convictions. — Gilbert Keith Chesterton