History and the Old Neighborhood Revisited

History! Very little brings history into focus like remembering our own childhood neighborhood, friends, environment and experiences. My wife, Sue McElyea, was studying some Journalism courses at the University of Alabama, Huntsville, in the 1980s. As one of her assignments, she elected to interview the owner of the J.C. Brown General Merchandise store at the corner of Triana Boulevard and Ninth Avenue. Additionally, she interviewed various “old-time” residents of the then “West Huntsville” neighborhood. The currently recognized West Huntsville extension toward Madison, AL, did not then exist. I still cling to a recognition of the “old neighborhood” as the only West Huntsville. The extended area is foreign to me and is occupied primarily by “new” residents and other entities. 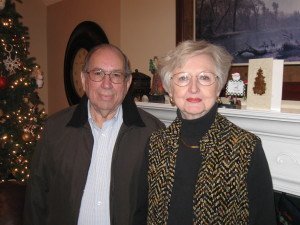 This “store” is remembered fondly by many, and the building is still standing as of August 2016. A few years ago the store was opened briefly, and the contents auctioned. The auction was enjoyed by many through purchases, and by many who just took the opportunity to browse and reflect. The interview follows:

Worn smooth with age, the wooden floor creaks softly as Bill Brown walks over to extend a hand of welcome.

Visiting this store is a visit into a past era.

Still stocked with everything from horse collars to hair pins, the little store on the corner continues to serve loyal customers.

According to Brown, the store was founded by his father in 1898. “That was the same year that 30,000 troops camped in Huntsville during the Spanish-American War,” he adds.

Brown explains that his father moved to Huntsville from Belvedere, Tenn. “Seeing the need and potential for a general merchandise business, he opened this store.”

Huntsville was a mill town in the earlier days. A lot of people, he says, were concentrated in one general area and depended on the neighborhood general store.

“People back then couldn’t always come to us, so we went to them,” Brown recalls, A clerk would go door-to-door every morning taking orders and then deliveries were made ln the afternoon, he says.

Brown adds that deliveries were made by horse and wagon until the mid-30s. “We got our first truck about that time.”

Brown also tells how, in the early days of the store, everybody bought on credit. “We kept tally of what they had bought and they paid up on payday.”

When asked if they have ever advertised ln the newspaper, Brown replies that they never have. “We’ve passed out circulars to the folks – that’s all the advertising we’ve ever done.”

Reminiscing about his childhood, Brown says, “I always helped at the store as far back as I can remember.” The faml1y home was Just behind the store – “a big, old gingerbread house.”

Kiddingly, Brown talks about the four boys in the family. “The other three had better sense,” referring to his life with the store.

After his father’s death in 1939, Brown says that he came back to Huntsville and took over the store in 1940.

A former employee of the store, Mrs. Mildred Moorehead, 62, of Triana Blvd. recalls her days at the store in 1937. “I worked part-time for $2.25 a week and thought that was big money.”

Mrs. Moorehead says that customers did not come in the store and pick up the items they wanted. “They gave the clerk a list and he would gather up everything.”

Chickens were sold from a coop outside, she says. “No such thing as buying a dressed chicken – you had to do that yourself.”

The only thing, Mrs. Moorehead recalls, that you couldn’t buy at Brown’s was ice cream. “You had to go to the drug store for that.”

She fondly remembers the cats that were always in the store and the big Warm Morning heater that “warmed many a backside.”

“Those are all good memories,” she says.

Hawkins, 72 and retired, lives a few blocks from the store. He says he started trading at the store in 1935 when he married.

“I’ve had some bad times ln the past,” Hawkins recalls, “and the Browns have been awfully good to me. My credit was always good there.”

Hawkins says he still goes to the store several times a week.   “I consider Bill Brown a good friend and a good businessman.”

Today, J.C. Brown and Co. General Merchandise, though quite different from the bustling operation of the past, still offers the customer a unique experience.

The old, mahogany display cases are still there, the dusty glass dimming their contents.

There is still a wide range of merchandise – from wooden kegs, well buckets and wash tubs to the present-day thaw-out dinners.

The ro1l-top desk, old and scarred but with papers neatly arranged, dominates the tiny office as it has done for more than half a century.

Above the desk is an autographed picture of President Harry S. Truman and a picture of the USS Essex. These are some of Bill Brown’s own memories of the past.

The general store, Brown says, represents a wonderful opportunity for the person “who wants to work.”

The days in this business are long and hard, “from can to can’t,” he adds. “But, I’ve loved it all, and I feel that the store has been a big help to the community.”