XXXXX bad memory childhood detailing poor or bad childhoods! Attempts to erase their affects and consequences seem to appear daily in the news. Erasing those memories and affects is not as easy as obliterating them with XXXXX or some other simple device or semantics. Childhood experiences, which later become our memories, are often not pleasant or uplifting at the time of the experience. However, in later years as we look back on them the memory of the experience is seen in a very different light. Meetings with friends or others who experienced the same events or conditions often stimulate very warm, enjoyable discussions and delight in relating the experiences to those who may not have been involved. 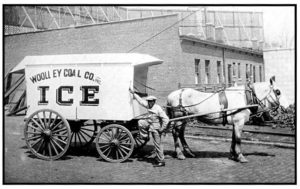 The Ice Man on His Daily Rounds

While having dinner with close friends recently, we lived in the same neighborhood and went to grade school and high school together in the 1950s, we talked about some of the things we remember, but that the children of today are completely divorced from. In the period before, during, and after the Second World War we and our neighbors didn’t have refrigerators. If you were lucky (not very poor) you had an ice box that was furnished with blocks of ice, probably on a daily basis, by someone delivering it on a horse-drawn wagon. Sometimes on a truck (gasoline was rationed). In addition, many of the groceries were hauled through the neighborhoods and into the country communities by “rolling stores.” These stores were enclosed structures (probably hand-built on truck beds) and fitted with shelving and other fixtures to accommodate those who had no way or desire to travel to the stores, which were few and far between. The stores were efficient ways to get the food and other supplies to customers in the rationing environment. While these conditions were hardships at the time of the experiences, I believe most survivors of today view them as fond memories along with the simpler life of those times.